Plan your application, from I-130 to Interview

Additionally your Green Card process, along with your Immigration Category (and sometimes your country of birth) determines how long each step will take. By adding all the steps, the length of the Green Card process, from start to finish, can be estimated.

Our Dynamic Planner applies the latest Processing Times to your Green Card process and circumstances to predict when each step will take place. 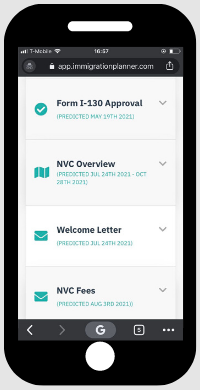 Getting started planning your application

You checked the family relationship between applicants and sponsor not only to make sure that it is a ‘qualifying’ relationship, but also to know which supporting documents you are going to need to prove this family relationship (you need this evidence at the very beginning of the process to file Form I-130);

You know whether you will start the Green Card process as an ‘immediate relative’, or under a ‘preference’ category (F1, F2A, F2B, F3, F4). This will have an impact not only on your timeline, but also on the immigration rules you are subjected to;

You know whether you are going to go through adjustment of status, or consular processing:

You also realize that applicants generally do not get to choose their process. In particular, U.S. Citizens are not supposed to get their parents (or spouse) to the United States and then file for adjustment once they are on American soil: such applicants need to go through consular processing.

There is a ‘filing strategy’ in place for the entire family, not just one family member:

You have a sense of the timeline associated with your Green Card case, so that you have realistic expectations as to when you are likely to get your Green Card, and can plan your life accordingly.

Most applicants believe that their case should be expedited. But the reality is that getting a case expedited is hard, with very few life scenarios meeting the requirements of U.S. immigration rules. So simply do not count on one and consider spending no time and energy on making a case for expedite…

Travel while in process

Adjustment applicants cannot travel in and out of the United States before they get their ‘combo card’ (employment authorization and advance parole) approved. There is few exemptions to that rule, such as being present in the United States under an H1B, so applicants need to be careful. But once advance parole is approved, use it (unless you have grounds of inadmissibility that can be held against you) and stop looking on the internet for stories of applicants who were denied entry while being on advance parole.

Applicants going through the consular process understand that getting a temporary visa to travel to the United States is possible, even after Form I-130 has been filed. But they also recognize that they are going to have to show ties to their current home country.

You are aware of the positive and negative things that life events can bring to your Green Card application. For instance, to maintain Green Card eligibility:

Other examples, you know ahead of time whether the LPR sponsor becoming a U.S. Citizen is a good idea or not:

You either have an affidavit of support strategy, or you have an idea of what it could be:

The affidavit of support is a math exercise: either the family sponsor is meeting the minimum income requirements based on their ‘household size’ or not;

Strengthen and update your case

You understand that your Green Card application is a ‘living organism’: its strength can grow over time, and it will most likely need updates (because of the length of the process). For instance:

More than 95% of preference-based classification (F1 to F4) are processed at the California Service Center. So differences between Service Centers might simply reflect widely different workload, rather than actual differences in the time it takes to process application.

The National Visa Center (NVC) is a unit of the U.S. State Department which essentially makes sure that applicants Green Card Case is ‘interview-ready’, so that the Interview with a Consular Officer can take place. Note the following:

Our Planner retrieves the latest from the State Department every week from this page.

Because of staffing reductions linked to Covid-19, the time it takes Applicants to get to Documentarily Qualified has increased:

I-485 Processing Times are the one and only driver of the Interview for applicants going through Adjustment of Status. Note the following:

As of March 2020, the ‘average’ across all USCIS Field Offices look something like:

The National Benefit Center (NBC) is a unit of USCIS that makes sure that the Green Card Cases of applicants are ‘interview-ready’, so that an Interview with an ‘Adjudicating Officer’ at a USCIS Field Office can take place. While doing that, the NBC is also in charge of delivering the Employment Authorization Card (through Form I-765 approval), and Advance Parole (through Form I-131 approval).

How long it takes to approve Form I-765 has a limited impact on the date of the Interview. The most important factor is how long applicants have to wait for their Interview at the USCIS Field Office, which varies greatly depending on how ‘busy’ the office is, and which is captured through Form I-485 Processing Times.

For eligible Immediate Relatives of U.S. Citizens living in the United States.

For applicants living abroad (outside the United States) who are under a family-based classification (F1, F2A, F2B, F3, F4).

For Immediate Relatives of U.S. Citizens who are living outside the United States.

Work on Your Green Card Application
File your application without the assistance of a Lawyer.

Need to ask us a question?