Expert’s corner: why ‘filing dates’ of the visa bulletin are not helpful

It turned out, it was not that great for U.S. immigration agencies either.  From 2010 to 2014, the State Department used on average only 98% of all the family green cards the law allowed them to issue.  2% might not seems like much, but we are talking about more than 20,000 individuals, applicants and sometimes their families not obtaining a green card because of what a White House report called ‘systemic inefficiencies'(1).

So the filing date was introduced on October 1st, 2015 and added to the visa bulletin next to a ‘final action date’. It was supposed to help applicants know when to get ready: in an ideal situation, applications would be ‘pre-processed’ ahead of time so that as soon as the priority dates of applicants became current(2), the interview will be scheduled and the green card issued(3).

Close to two years after its introduction, we thought it was time for an evaluation. At Immigration Planner we do not find the filing date as helpful as it could be for three main reasons:

When filing date does not mean applicants can file.

As we know, immediate relatives do not have to worry about filing dates.  So let’s see what happens to applicants eligible to a family-based preference (FB1, FB2A, FB2B, FB3, FB4).

What about applicants going through adjustment of status?  Well, the visa bulletin asks applicants to look separetly for ‘ information on whether USCIS has determined that this <filing date> chart can be used. And, although there has been exceptions, what does this ‘information’ usually say?  You guessed it, it says that ‘final action dates’ should be used by applicants to determine whether they can file their adjustment of status application:

How USCIS instructs applicants to use action dates or filing dates.

The evolution of the filing date from inception show a pattern of one monthly advancement followed by fairly long periods of stagnation:

You can see how it makes sense from U.S. government agencies perspective.  You have an inventory of applications to be processed, and when you feel that you are near the end of your current stack, you go in your warehouse and get a bunch of new applications.

But this approach is not so great for applicants.  For them, a filing date would be most helpful if its ‘distance’ with the ‘final action date’ was pretty much the same all the time.  Then you would know for example that if your priority date became current compared to filing date the 1st of January, it would usually become current compare to the final action date the 1st of July.  That would be helpful…  So let’s take a look…

If you see a pattern here, you have to get in touch with us.  The bottom line is that not moving filing dates every month prevents applicants from having a sense of the ‘distance’ between filing and final action dates.  To know where you stand as an applicant, you have to know when the filing date was last moved forward and by how much.  Not many applicants have the time to carry out such analysis.

The broken promise of an early warning system

Senior managers of the National Visa Center sometimes mention that filing dates indicate to the applicants that their final action date becoming current is ‘within sights’, ‘within the next 12 months’.  After all, adding filing date to the visa bulletin was said to be merely exposing the set of dates actually used internally by U.S. immigration agencies to replenish their inventory of application.

In order to see whether this works, we looked back and did the following:

Here are the results:

We added a ‘yearLine’.  One would expect the lines to be consistently under that yearLine.  That would mean that dates mentionned in filing dates take less than a year to become current as filing action dates.  But that has simply not been the case so far.  And no other clear pattern is distinguishable so far.

One could argue that the timing of the welcome letter for applicants going through consular processing might smooth the process, and this is a fair point.  For instance, FB2A applicants can see their priority date becoming current compared to the filing date in January 2016;  it takes them 4 or 5 months to prepare their application by which time they receive their welcome letter;  they submit their detailed application right away, and have ample time to deal with request for evidence, if any;  when their priority date becomes current compared to the final action date, because their application is already pre-processed, it is sent to the consulate abroad immediately and the interview scheduled.

Again, if the filing date were to move forward every month, it might help applicants better understand and anticipate.

In conclusion, we would here at immigrationPlanner remind applicants and sponsors that filing date is still fairly new by U.S. government agencies standards.  So we might in a different place in terms of analysis at the end of September 2017, which is the end of the government fiscal year.  But for the time being, we feel that filingDate is not as helpful to applicants as it could, primarily because of brusque movements forward followed by plateaus.

(1):  Modernizing & Streamlining our legal immigration system for the 21st century – White House, July 2015.  Page 14:  ‘As some visa numbers are limited by law, State strives to issue the appropriate number of these visas each year, consistent with legal guidelines. Over the last five years, State has averaged a 98 percent use of visa numbers authorized by statute, leaving some visa numbers unused due to systemic inefficiencies.’

(3):  If an interview is scheduled (or waived), it means a decision will be made on the green card application.  By law, U.S. immigration agencies are not allowed to schedule an interview and have an application adjudicated if they do not have a green card number available for the applicant.

Have you received your Welcome or Interview letter?
Get your detailed predictions and a personalized timeline based on USCIS processing times and community feedback. Updated each month to prevent mistakes and avoid delays. 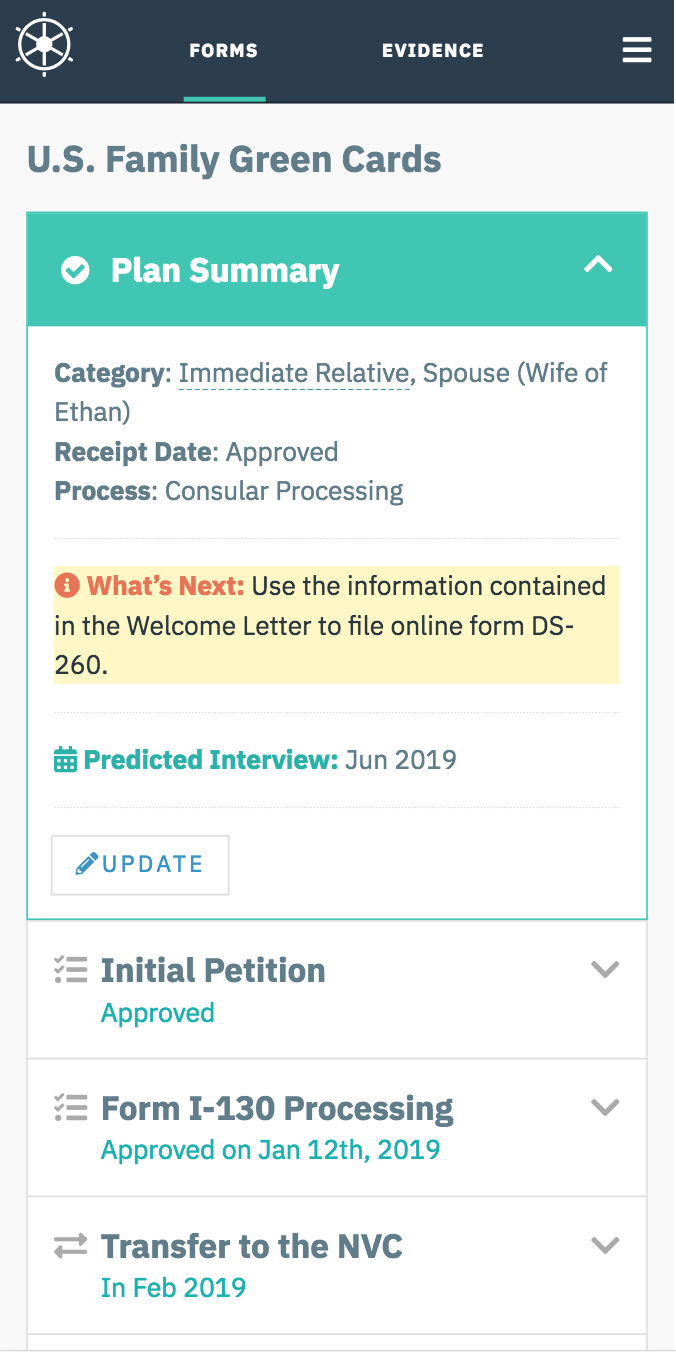